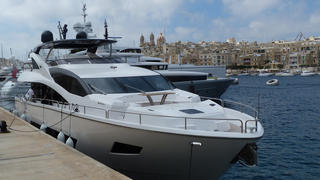 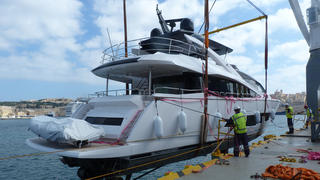 Sam K, the latest model in the 26.3 metre Sunseeker 86 Yacht series, has been delivered to Malta, with the handover completed on August 8.

Launched in July with in-house design by Sunseeker International, this all-GRP yacht features accommodation for eight guests across four cabins, including a master suite, VIP and two twin cabins. Based in Malta’s Grand Harbour, Sam K will now be made available as a yacht for charter.

Sunseeker adds that the owners had a very specific brief for all aspects of the interior design on board Sam K, from her Ralph Lauren bed linen to her dark blue soft furnishings. Other key features include a water purifier, foredeck seating area, fold-out superyacht terrace and zero-speed stabilisation for a comfortable night’s sleep at anchor.

Sam K is propelled by a pair of MTU 12V 2000 M96L engines for a total power output of 5,280hp and a top speed of up to 30 knots. She is kitted out with a Williams TurboJet 445 tender, a Seabob F5S and many other superyacht water toys besides.

This fast-planing yacht is designed to cruise comfortably at 24 knots and has a maximum cruising range of 1,000 nautical miles at 10 knots, thanks to her total fuel capacity of 11,000 litres.

Based on the previous Sunseeker 86, the Sunseeker 86 Yacht range was introduced in 2014 with a new a hull form designed around displacement speeds. It has gone on to be a hugely successful model for the Poole-based yard, with more than seven hulls due to be launched in 2016 alone.