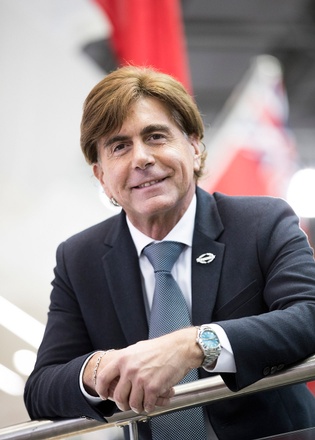 New Sunseeker chief executive Andrea Frabetti has set out a new development plan that will see the company’s current range double over the next three years.

By 2022, the Poole based superyacht shipyard will have a range totalling 22 models.

The committee will develop a new framework for the business aided by a £50 million investment implemented over five years.

As a result, Sunseeker will be “a more product-facing organisation” with a “robust global distribution network”, the yard said.

Frabetti said the new models will “include new product segments” as well as improved existing lines.

He added: “To enable this, we are actively developing our existing footprint as well as seeking new facilities and partnership opportunities.’

Sales director Sean Robertson described the development plan as “bold” and revealed it will result in older models “being phased out”.

“New and exciting products breed growth in this market and the response we have received for our latest models has been nothing short of incredible,” he said.

The news comes after the sudden departure of former chief executive Christian Marti, who is understood to have resigned last week due to personal reasons. He took over the role in November 2018.