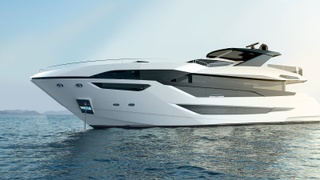 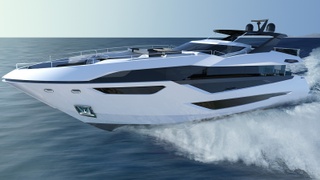 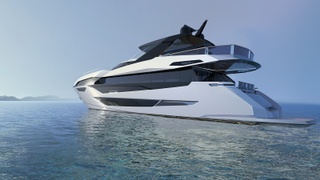 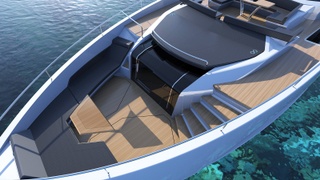 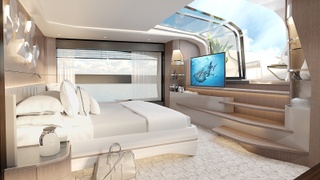 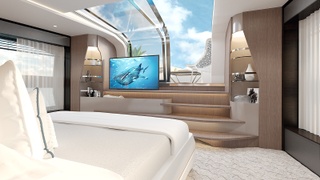 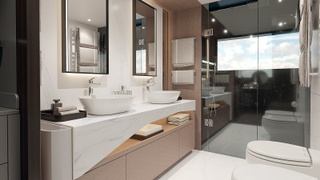 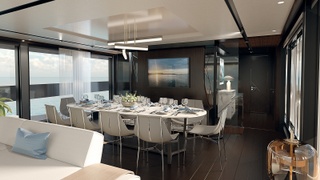 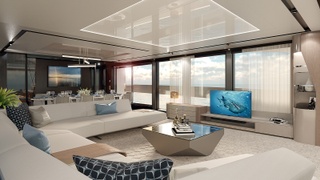 Due to launch in autumn 2021, the yacht will be built from a GRP hull and superstructure, with a 125GT interior.

Key features of the two-deck yacht include “elegant and powerful” exterior lines and a flybridge which “seamlessly” transitions into the foredeck, with uninterrupted walk-around access. The flybridge can be customised to feature an optional helm station, generous seating and a wet bar. There is also space for a Jacuzzi or additional sun loungers.

There are a number of al fresco entertaining areas on board, including the foredeck, which features two separate seating areas and a sunpad.

The aft tender garage meanwhile is capable of converting into a “large and luxurious” beach club, complete with a built-in BBQ and a rain shower.

Accommodation on board is for a total of 10 guests in four lower deck ensuite guest cabins while the full beam owner’s suite with an ensuite, walk-in wardrobe, office and large lobby sits on the main deck.

The owner’s suite is illuminated by natural light, thanks to over-sized glazing, while owners also have access to a foredeck terrace through a fully glazed sliding door forward.

The interior has been designed to “exude expansive space and light throughout,” the yard said.

Elsewhere, the main deck saloon has been described as “penthouse style” with “elegant interiors."

“The layering of textual elements and the mix of furnishings and fabrics feels timeless with a modern twist that oozes sleek simplicity and sophistication,” the yard said.

The main deck also features a formal dining area for eight guests and a large galley forward with direct side deck access for crew. The forward crew quarters are accessed through the galley. Accommodation on board is for a total of five crew in ensuite three cabins.

The tender garage meanwhile can be flooded electronically and is large enough to accommodate a Williams 460 Sportjet, as well as Seabobs.

“It has been crafted with the passion and precision only found at Sunseeker,” he said. “This new model is packed with new features and entertainment options including what we believe to be the first open-plan bow to stern entertainment deck and an owner’s suite with private access to its terrace at the bow.”

It comes after the British yard launched an in-house superyacht division at the Monaco Yacht Show this year.

The builder has teamed up with Pendennis and Icon Yachts to build a new range of metal-built superyachts ranging from 30.7 metres to 49 metres.