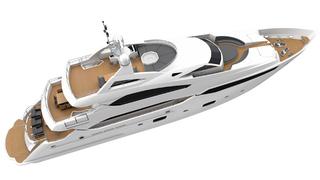 A development of the popular 37m series, of which nine have been delivered to date, the 40 metre superyacht to be displayed at the Show has had a number of unique custom modifications, including an extended wheelhouse deck layout which offers greater flexibity and the addition of an upper deck stateroom created as a result of having all four crew cabins on the lower deck.

The skydeck layout has also been highly customised in order to maximise space and to offer a combination of formal and informal seating, while the main deck saloon has an oval feature bar positioned aft to serve both the saloon and main aft deck cockpit. The vessel also features an integrated touch-screen-controlled lighting system and state-of-the-art audio visual system installed on the main and upper decks featuring Bang & Olufsen equipment.