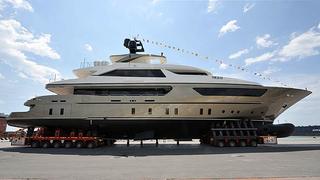 The Sanlorenzo 46 Steel yacht Achilles has hit the water after being transported by night through the streets of Massa-Carrara. She’s the fourth motor yacht of this flagship series, introduced in 2010, following sisterships Lammouche (2010), Carol (2011) and Rêve d’Or (2011). A total of six have been sold to date.

Built in steel and aluminium, this 46m displacement yacht is designed by Viareggio Division Style, a department of Sanlorenzo. Like her predecessors, she has all the features and details that made the first hull so successful: the stern beach club, a large lateral tender garage, a toy garage below the foredeck and the lower deck housing technical and service areas.

Achilles will be delivered this summer, and is scheduled to be presented at the Monaco Yacht Show in September.