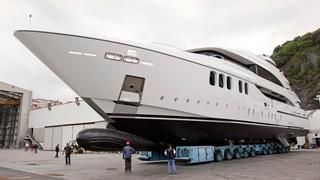 Previously known under the hull number C22.3, Alexander Again is the 2nd motor yacht launched by Mondo Marine this year.

This 49.15m semi-displacement yacht built in aluminium is the successor to a 41.10m Mondo Marine launched in 2009. Designed by Giorgio Vafiadis, she has the same interior designer as her predecessor, Luca Dini. The décoration theme is based on a glossy black lacquer and rosewood with gold and silver leaf and mirrors.

The interior layout accommodates 10 guests in five staterooms. The full-beam master suite is on the main deck, while two VIP staterooms,a double and a twin cabin are on the lower deck.

Powered by twin MTU engines, she has a top speed of 19 knots and a cruising speed of 16 knots.

Alexander Again will be delivered in July.