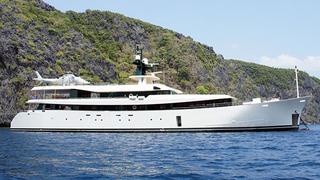 Ark Angel is a 55 metre yacht with an atypical history, having changed faces on numerous occasions during her life. She has been upgraded three times, each time returning to HYS Yachts for the refit.

Launched by Mitsubishi in 1979 under the name Taishu Maru, she began her career as a Japanese maritime cadet training vessel, but was converted into an expedition yacht by HYS Yachts when she was sold in 2000. Renamed Tiara II, she retained most of her original exterior looks, giving her the profile of a robust, go-anywhere motor yacht, but her interior was given a luxurious transformation.

Four years later she was sold again, and her new owner brought her back to HYS Yachts. This time, her exterior design was extensively changed: the superstructure was extended, tender garages were created and any traces of her former commercial appearance were subsumed into a more contemporary yacht design. Renamed Galapagos, the yacht cruised the world and was spotted many times on the Côte d'Azur where we took our picture.

In 2009, she was sold again and left the Med for the Philippines, where another extensive refit was scheduled in September 2009, again at HYS Yachts. The yard choice was no coincidence as her new owner had been a guest on board when she was Tiara II.

Simon Jupe and the in-house team at HYS Yachts worked on this project to push Galapagos to an even higher level of luxury. The results are impressive to see from the exterior: side combings have been restyled, the stern has been extended to upgrade the bathing platform design, the hull and superstructure have been fully faired and repainted, and she now has two helipads (a large one and a touch-and-go one), a sundeck, and a new radar mast. The interior was also transformed with a new layout and décor. A new full-beam owner's suite and a VIP cabin were created and the galley and the wheelhouse were modernised.

Renamed Ark Angel the yacht embarked upon her new life in mid 2011. Cruising Asian waters, she's currently only privately used, but HYS Yachts said that the owner is exploring possibilities of chartering her in the future.