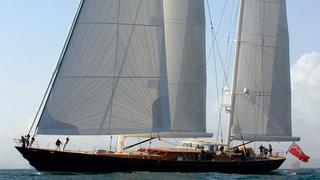 On 7 December 2010, Ron Holland kindly contributed an exclusive view for us about his latest superyacht launch, the 46m Christopher. Now the shipyard Pendennis informs us of her delivery during the last days of February.

This delivery took place after multiple sets of sea trials. The crew was impressed by the performances reached. Terry Gould, Captain of Christopher, commented: “It was a real pleasure sailing Christopher for the first time. The team at Pendennis have delivered a world-class cruising and racing vessel".

Christopher is now finishing her trip across the Atlantic to the Caribbean started on 26 February. She will arrive in time to compete in the 25th Anniversary St Barths Bucket with her delighted Owners on board.