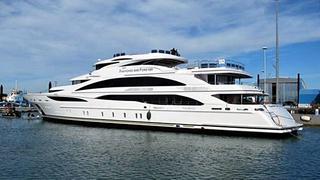 With her imminent launch anticipated for several months now, the first sight of Diamonds Are Forever was cause for great excitement. The 61 metre vessel is the fourth motor yacht of over 60 metres to be delivered in 2011 by Benetti.

Previously known as hull number FB253, Diamonds Are Forever was created by the Italian yard's in-house architects and designers.

At 1,100 GRT, the yacht has a voluminous interior, designed by Evan K Marshall, which is distributed over four decks. Her layout accommodates 12 guests in two panoramic master suites and four double guest cabins on the lower deck. Special features include a central elevator servicing all decks, including the additional sundeck above the full-beam upper saloon. And the yacht also has a touch-and-go helipad on the aft part of the upper deck.

After her successful technical launch this week, Diamonds Are Forever will start her sea trials soon and is scheduled for a December delivery.