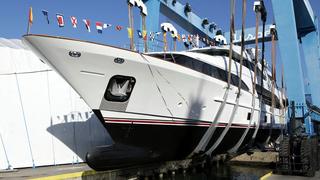 Just a few days after the official launch of Diamonds Are Forever, another hull from the successful Benetti Classic series was launched by Benetti at the Viareggio yard.

This yacht, previously known under the hull number BC127 and now christened FF1, is part of the recently upgraded version of this series now called Classic 121. As reminder, her two sister ships Battal and Domani were delivered in 2011.

The Classic 121 is a composite yacht of 36.90m designed by Stefano Righini. She carries strong hints of her predecessors with extra details like a hard-top over the sundeck and large portholes in the hull.

FF1 has a modern interior created according to the owner's specifications. Her layout is conventional with a master stateroom on the main deck and two double and two twin cabins on the lower deck.