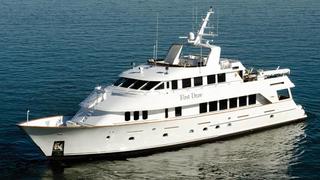 Built in composite in 1995 to an in-house design, First Draw was brought completely up to date in the refit which saw her teak decks replaced, furniture and tenders renewed, sundeck refurbished with a new bar and spa pool, and a new Awlgrip paint job.

The interior was completely redecorated in a contemporary style created in collaboration with Varo Interior Design. With a slight change in layout the yacht now accommodates nine guests in four cabins: a VIP on the main deck with a larger bathroom, a full-beam master suite on the lower deck, a triple cabin with queen-sized and single berths, and a twin cabin.

Twin Caterpillar engines were installed to replace the former twin Deutz-MWM ones and all electronics, navigation systems and audio/video equipment were replaced.

Currently berthed in Vancouver, WA, United States, First Draw is as good as new and once again ready to cruise the world.