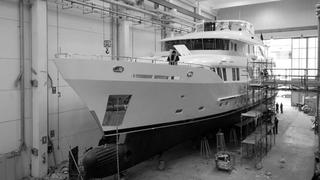 Launched in April, the 39.2m Gattopardo VI is the latest yacht built by the Italian shipyard CBI Navi.

CBI Navi has kindly sent us some of the first pictures of Gattopardo VI. This new yacht is an evolution of the 36m Metsuyan IV built by the same yard in 2006. Both of them have the same naval architecture and design from Jaron Ginton.

The in-house team was responsible for the interior design. Her layout offers accommodation in a full-beam owner’s suite on the main deck and four further double guest staterooms on the lower deck. A special feature is an elevator connecting all four decks, including the sundeck.

Built in steel and aluminium, she's powered by twin Caterpillar C-32 engines of 850hp each giving a top speed of 14 knots, a cruising speed of 10 knots, and an impressive range of 7,000 nautical miles at 7 knots.

Gattopardo VI is now ready to leave Viareggio for her first cruises.