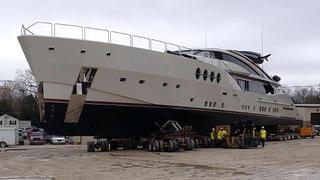 Sold by Moran Yacht & Ship in January 2012, the project Stimulus becomes a reality. The 65.5m superyacht has been launched by Palmer Johnson this weekend under her definitive name Lady M.

Lady M becomes the new flagship of the American yard. She's the first unit of the PJ210 series designed by Nuvolari & Lenard. This sporty tri-deck superyacht is entirely built in aluminium with a gross tonnage of 750 GT.

The interior, also designed by Nuvolari & Lenard, accommodates 12 guests in a full-beam master suite on the main deck, a full-beam VIP, two double and two twin cabins on the lower deck. Special features include a pool on the foredeck. When not being used as a pool, the space is drained and used to hold the tender. The pool floor also raises to allow for helicopter touch down and take off on the foredeck.

Moran Yacht & Ship managed the build and, following her sea trials, Lady M will be delivered this summer.