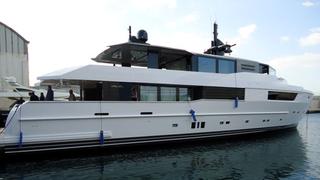 Initially due to debut at the Festival de la Plaisance of Cannes last September, the first Arcadia 115 has been long awaited, and the extra months needed to complete this model have only served to heighten the anticipation.

The trideck yacht is based on the successful Arcadia 85, which has grown to a fleet of five in only two years, with Francesco Guida applying the same innovative design to a 35 metre semi-displacement hull built in composite. His design has been guided by an eco-friendly approach which features, for example, a relatively transparent superstructure that allows natural light to fill the interior, and solar panels that provide enough power to limit the use of generators.

The interior accommodates 10 guests in a full-beam master suite on the main deck, and four double cabins on the lower deck. Twin 1,224hp MAN engines will give her a top speed of approximately 19 knots, and a range up to 1,700 nautical miles.

M'Ocean will be delivered before the end of the year, while a second hull is already under construction, and should be delivered in 2013.