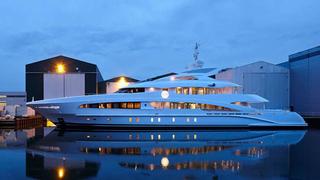 The yacht was launched on 28 March, 2014, in a private ceremony where the owner christened the new superyacht Monaco Wolf. Burgess sold the new build Heesen superyacht, then called Project Azuro, in February of this year. Director of Burgess Rupert Nelson, who introduced the owner to Heesen, says about the launch, 'The Heesen production team were on hand for the launching, and it was a privilege to meet them in person. So often we meet the project front men and women, but it is equally important to know the production team – especially where there are shortened delivery schedules. Their support is crucial during the final stages prior to delivery.'

Frank Laupman of Omega Architects designed Monaco Wolf's distinctive and contemporary exterior lines. Monaco Wolf has a reverse sheer 'pelican beak' bow, as Heesen calls, making her undoubtedly recognisable as part of the Heesen family. Continuous sheets of laminated triple glazing are thermo-bonded to the superstructure to create a seamless wall of windows. Also, the use of plate glass screens in the exterior railings satisfies the standard safety regulations and also offers safe passage while underway for any canine passengers aboard Monaco Wolf.

Italian interior designer Francesco Paszkowski is responsible for Monaco Wolf's minimalist, yet elegant interior design, which is adorned in teak, limestone and leather details. Architect Margherita Casprini collaborated with Paszkowski on this project. A special feature of superyacht Monaco Wolf is her custom-controlled lighting system, which is designed to transform the yacht's atmosphere from bright party mode to calm, subtle lighting.

Monaco Wolf accommodates up to 12 guests in six staterooms. She has a traditional main deck master with a full beam bedroom and bath with windows running along the entire length of the room. Lower deck guest suites include a full beam VIP, two double and two twin staterooms.

After undergoing sea trials in the North Sea, Monaco Wolf will be delivered to her owners at the end of May 2014.