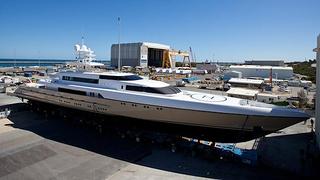 Smeralda is powered by twin 2,720kW MTU main engines which are expected to deliver performance of close to 30 knots with a cruising range of 4,500 miles at 18 knots.

Smeralda follows the much-acclaimed 73.5m motor yachts, Silver and Silver Zwei, which were the brainchild of a German owner. She is expected to leapfrog her sisterships - now called Rabdan and Dragonfly - into the list of the world's Top 100 Largest Yachts, where they currently occupy the 95th and 96th positions. At 77m, Smeralda will slot between Tango and Samar, currently holding 77th and 78th places, respectively.

Hanseatic has a fourth motor yacht in the series under construction, a virtual sistership to Smeralda, and two larger concept designs on the drawing board.

Her accommodation features walnut panelling with nine guest cabins and a massive owner’s apartment utilising the entire upper deck and including a large private aft-facing terrace.

Built in aluminium, Smeralda is finished to an extremely high standard. She was launched at the Australian Marine Complex facility, south of Perth, and will undergo finishing and commissioning over the next couple of months with delivery scheduled for May.