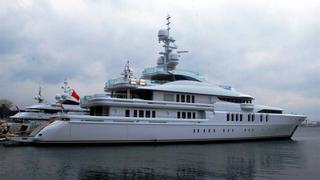 2011 will be a record year for Turkey's Proteksan-Turquoise yard following the launch of Talisman C few days ago. No less than three major yachts have hit the water in the past few months, and the latest one is no less than the flagship of the yard.

Talisman C, with a length of 70.54m, is the successor of another Proteksan-Turquoise launched in 2006. Created for a repeat client, the new Talisman C has a naval architecture by Hydro Tec and is designed by H2 Yacht Design outside as well as inside with an Art Deco ambiance.

The interior accommodates 12 guests in six staterooms including a huge master suite forward on the main deck, slightly raised to have a panoramic view of the sea. It comprises also a large dressing and bathroom and a spacious office/library. On the same deck are the VIP stateroom and a gymnasium. The rest of the guests are in two double and two twin cabins on the lower deck.

Like her predecessor, Talisman C features a crows nest over the sundeck offering a fantastic 360° view around the yacht.

Lloyd's classed and MCA compliant, Talisman C is built in steel and aluminium. She's powered by twin MTU engines of 2,447hp giving a top speed of 17 knots, a cruising speed of 15 knots and a range of 6,000 nautical miles at 12 knots.

Talisman C will be delivered in August.