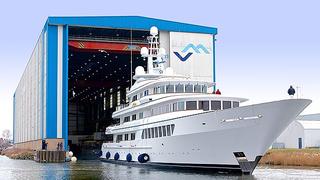 Superyacht Utopia back to Feadship for refit

Utopia returns to Feadship for a second refit. The 71.6m superyacht is welcomed again in the impressive shed of Makkum, exactly where the 99m project Dream was launched some weeks ago.

'The main reason to come to Feadship for a refit is to retain the essence of how the boat was built and ensure she remains of the highest pedigree possible in the world today,' said Utopia’s captain, Kevin Paul Collins.

Originally designed by De Voogt, Michael McQuiston and Redman Whiteley Dixon, Utopia was already personalized to the owner's wishes in 2007 with Guido de Groot inputs. This time, the refit will be composed of the usual maintenance jobs but also several upgrades: repainting the hull and the superstructure, adding a new antifouling coat, installing a new A-Sea shore power convertor and a new HMSA sewage treatment plant to meet the latest IMO requirements, and reconditioning the teak decks.

Kevin Paul Collins added: 'Although we have covered some 46,000 miles over the past two years, Utopia has been exceptional. She has also been very well maintained and we could easily have waited another year for this refit. However, when the owner heard that a dock was available in March he changed his cruising plans and sent us off on our third Atlantic crossing in seven months. It is definitely worth the effort as the owners get a better product. And it is a great experience for me as skipper to take a signature Feadship like this back to the yard. It gives us all a real sense of pride.'