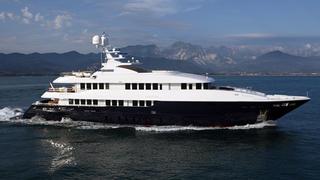 Yesterday we reported the launch of Alexander Again at Mondo Marine, a 49.15m motor yacht. But she was not the first launch of the Italian yard this year, the first one being Zaliv III.

Recently delivered, few facts were reported about this 49.36m semi-displacement motor yacht. Built in aluminium, Zaliv III is designed by the same team as Alexander Again: Giorgio Vafiadis for the exterior and Luca Dini for the interior.

The interior layout accommodates 12 guests. Two master suites of equal size are available, a full beam one on the main deck, and one on the bridge deck with direct access to the aft deck. The eight further guests are accommodated in two double and two twin cabins on the lower deck.

Reminding us the yacht O'Ceanos designed by Giorgio Vafiadis and launched by Mondo Marine in 2006, Zaliv III has a far better performance due to her more powerful twin MTU 16V 4000 M90 engines of 2,720kW each, giving a top speed of 22 knots and a cruising speed of 20 knots.

Launched in March, Zaliv III is now delivered to her owners.