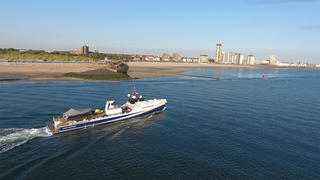 The first model in the newly updated Damen YS5009 range has been launched and named Fast & Furious, the Dutch yard has revealed.

This 55 metre superyacht support vessel from the Damen Shipyard in Vlissingen will get its public debut later this month at the Monaco Yacht Show, after which the owner is due to take delivery.

Fast & Furious boasts 225 square metres of exterior space on her aluminium deck and interiors totalling 465GT. She has been fitted out with a deck crane that can reach 5 metres to lift and launch superyacht water toys and tenders weighing up to 12 tonnes.

The aft deck can be used as a touch-and-go helipad for launching some of the best superyacht helicopters, with a maximum payload of 3.7 tonnes.

Designed to be crewed by a staff of up to 20, Fast & Furious features a semi-displacement steel hull with naval architecture by the in-house Damen team. Power comes from four Caterpillar 3512C diesel engines for a top speed of 22 knots, while her cruising speed of 16 knots delivers a maximum range of 5,000 nautical miles.

The YS5009 series is available in a choice of four pre-engineered configurations: dive, sail, heli and hangar.

Fast & Furious is the latest model in the Damen Yacht Support range, which was introduced in 2009. The Dutch yard adds that construction recently began on the ninth hull in the series, a 70 metre support vessel that is due to be delivered in spring 2017.