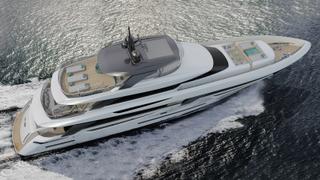 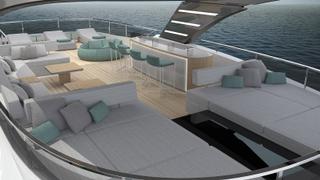 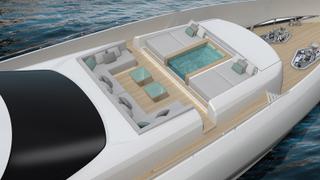 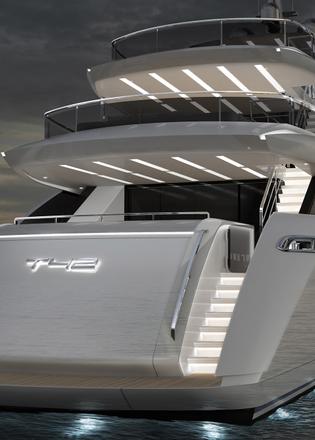 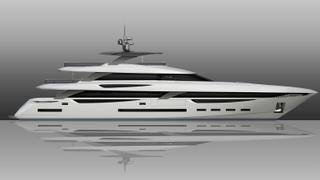 Venetian studio Team For Design Enrico Gobbi has released its latest superyacht concept T42. This 42.67 metre yacht would be built from an aluminium hull and superstructure at the Viareggio yard Rossinavi, as designer Carlo Lionetti describes their relationship as “solid and historically winning”.

In a statement, the studio added: “The yacht has a purposely sleek profile and is designed to have a dynamic look, making her seem in movement with her proportioned volumes and elegantly timeless lines.”

The off-white superstructure contrasts with silver metallic details, while the long foredeck is reminiscent of a sports car’s hood. Three curved windows set into the superstructure enhance the yacht’s sinuous and curvy profile.

Accommodation is for ten guests split between five cabins, including a main-deck owner’s cabin, while fold-out superyacht balconies allow this area and the main saloon to be completely opened up to the elements.

The generous on-deck relaxation spaces include a foredeck seating area measuring 20 square metres, which can be laid out in a variety of configurations, with the option to fit a superyacht spa pool.

Al fresco dining is offered in the centre of the 14 metre long upper deck underneath a large hardtop shade, while back aft three sunloungers provide an ideal spot for those looking to top up their tan. Dual staircase access and a food lift allow this area to be discreetly served by the crew.

Team For Design Enrico Gobbi has also paid particular attention to the on-deck lighting design, with LED bars built into the aft deck superstructure and indirect lighting around the superyacht beach club, ensuring that T42 will make a bold impact when moored up in a bustling Mediterranean marina.

The engine installation is undisclosed at this stage, but the hull has been designed to achieve a maximum speed of 22 knots. Team For Design Enrico Gobbi adds that the T42 concept could be built within 24 months of contracting signing.