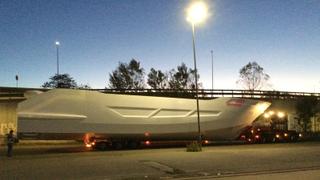 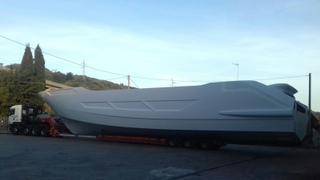 Italian yard Permare has released the first in-build pictures of the third hull in the 29.6 metre Amer Cento yacht series.

Currently under construction in Viareggio and due to launch in summer 2018, the new RINA-class model will be fitted with four Volvo Penta IPS 1200 poddrive diesel engines that should ensure sporty performance and speeds of up to 30 knots out on the open water.

The interior will be fitted out to an Art Deco style according to the client's wishes, while a combination of Seakeeper gyroscopes and Humphree fins will ensure a smooth cruising experience at 24 knots, the Italian yard added.

This all-GRP yacht is the third model in the series, following on from 2013’s Lady Liudmila (now Debra One) and 2016’s Seataly. The exterior styling and naval architecture comes courtesy of Massimo Verme and vital statistics include a seven metre beam and a maximum draught of two metres.

Permare has not released any further details about the new arrival’s layout, but previous models have featured accommodation for up to ten guests split across five cabins, including a full-beam owner’s suite, complete with en-suite bathroom and a private study.

Hey features include a sundeck Jacuzzi, an aft-loading tender garage, an eight-person dining table in the main-deck saloon, and a crew area that can sleep up to four people.

Other superyacht projects currently under development at the Italian yard include the fourth hull in the 28.65 metre Amer 94 series, which will be fitted with a Stefano Tini interior and launched next summer.