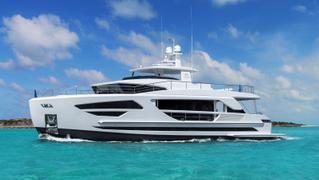 Horizon Yacht USA has announced that it has sold the third hull in the Horizon FD85 series to a repeat client who took delivery shortly after the 2018 Miami Yacht Show.

Accommodation on board Christine is for up to ten guests split across five staterooms, including an owner’s cabin, a VIP suite, two double rooms and a convertible twin. Meanwhile, the crew quarters allow for a staff of up to four people.

Key features include a hardtop on the superyacht sundeck, which provides shelter from the sun in the al fresco dining area and upper helm position.

Power comes from a pair of 1,600hp Caterpillar C32 ACERT diesel engines for a top speed of 20 knots and a cruising speed of 12-16 knots. What’s more, the maximum draught of just 1.83 metres means shallow waters cruising is possible.

Introduced in summer 2016, the FD85 has proved to be a particularly popular model for Horizon, with the second hull delivered to the Netherlands shortly after her public debut at the Cannes Yachting Festival 2017 and three further hulls under construction in Taiwan.

Other projects currently under development at the yard include the 33.53 metre Horizon RP110 series, the fourth hull of which was given a public debut at the 2017 Fort Lauderdale International Boat Show.