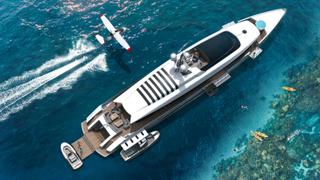 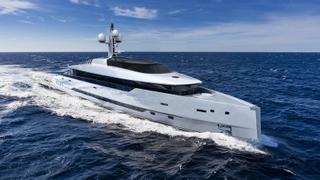 Aimed at the "younger generation", such as the "silicon valley owner," Komodo is a “flexible platform” offering “a stripped back, active and adventurous lifestyle anywhere in the world,” according to the designer.

“It’s a modern take on the large ceilings of Victorian buildings, much like the Natural History Museum,” he said. “We wanted to create something that would be a statement for a boat of this size and feature characteristics you would only find on a 70-metre plus superyacht, all the while maintaining a realistic lead time in build.”

Described as “sharp, angular and aggressively styled,” the Komodo superyacht will accommodate 10 guests across five double cabins. The main deck master cabin will overlook the bow area and will be equipped with a dressing room and ensuite, as well as a Jacuzzi area outside.

The main deck is also equipped with a lobby connecting to a cinema and private office with sliding door access to a folding balcony. The other four cabins sit below deck, along with a gym.

A 7.5 metre guest tender, 5.5 metre tender for crew use and two Jet Skis are easily swallowed up by the design’s tender garage, which can be redesigned according to the owner’s wishes.

The yacht will also feature a folding transom platform, which will transform into a beach club. A dining area with panoramic views will sit on the main deck, which also features sliding doors and a spacious saloon beneath glazed ceiling windows.

Design director Alastair Fletcher added: “Komodo is aimed at a more relaxed lifestyle, far-flung, casual cruising with an emphasis on outdoor living and watersports. There are many features designed to open up the interior space as well, removing tired or formal boundaries associated with compartmentalised living.”