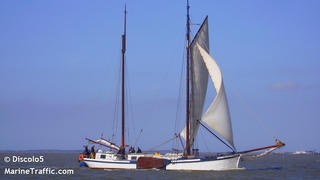 Three German tourists were killed when the mast of a sailing yacht snapped and crushed them in Harlingen, Netherlands on August 21.

It’s understood the ketch sailing yacht had been hired by the German family and was being skippered by her owner, whose wife was also on board. It’s thought the yacht is a 24.3 metre classic sailing yacht named Amicitia, built in 1889.

According to Dutch broadcaster NOS, there was a total of 14 people on board the yacht when the forward mast snapped. The three German tourists were aged 19, 43 and 48 and were enjoying a family holiday in the Netherlands at the time.

It’s not known why the mast broke when the incident happened outside of Harlingen port. Video footage shows the top of the wooden mast has been snapped off, which can be seen from some distance in the port.

The 51-year-old owner-skipper was arrested the day of the incident, and released after questioning. “There is something wrong on his ship and as captain, he has the responsibility,” explained a police spokesperson.

The Dutch Safety Board is investigating the accident.

The Biggest Superyacht Disasters From Around the World

The One and Barbie damaged by huge fire in Turkey