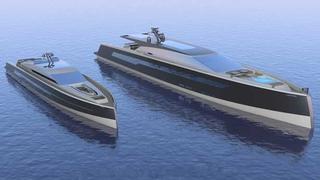 The 40m GT-40 H and the 55m GT-55 H are sleek semi-displacement yachts, styled in accordance with the designers’ ‘longer, lower, lighter’ ethos. The GT-55 has a huge ‘beach resort’ aft (the GT-40 has a smaller version) and both have bow cockpits. The layouts of the yachts emphasise casual living, with split-level main saloons that provide a mixture of light-filled and intimate living spaces. Both yachts also have full beam master suites and four en-suite guest cabins with large windows.

‘There are ever-increasing areas of glazing onboard craft of all sizes,’ says Will Allison, principal designer at Imaginocean. ‘Rapidly evolving technology is ensuring that the structural integrity of those vessels is not compromised, but the result is an increasing “greenhouse effect”, with much higher resultant air-conditioning loads.’

The Imaginocean designers have therefore used Smart Glass throughout the boat – it gradually tints at the touch of a button, reducing this effect. Similarly, the designs’ LED lighting schemes use much less power than more traditional light sources.

Both have hybrid propulsion systems, allowing them to operate at up to 20 knots courtesy of the main engines, travel at up to eight knots for short periods under electric power alone, or for extended periods in diesel-electric mode, with just the gensets running.

‘I wanted to explore the options available with existing technologies,’ says Allison, ‘so the systems are proven and practical. These are 20-knot boats, but they are likely to spend much of the time operating at much lower speeds.’

Allison also notes that due to the power-saving measures on the boat, ‘it is possible for yachts like these to spend considerable time at anchor without the gensets running’.

The GT-40 H and GT-55 H will be released officially at the 2012 Monaco Yacht Show. Located on the Superyacht Australia stand, IYD will also have the CWay 47m Tango 2 and 8m tender on display.