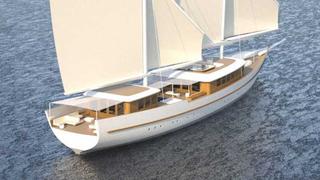 When Dutch yacht designers Van Geest Design received a query about whether they could design a dhow along the lines of a superyacht, the rather esoteric design brief was to recreate a folly in the centre of a royal garden.

The idea behind it was to evoke the romance of the past in the form of a traditional sailing dhow, the likes of which are nowadays a rare sight in Middle Eastern waters, and endow it with elements of discovery and delight. To this end Van Geest conceived a 'flower' design for the 60 metre dhow, whereby folding side hull panels could be opened to give guests expansive views of their surroundings or raised again for privacy, while at the centre of the boat a spa pool with surrounding sunpads reads as an oasis within a minimalistic, sand-coloured deck.

Another cultural element intrinsic to the design is the two-deckhouse configuration giving the utmost privacy to the owner with private family quarters which are entirely separate from the guest and crew accommodation cluster with the main deckhouse.

The owner's quarters are positioned aft and comprise a master cabin with separate his-and-hers bathrooms and walk-in wardrobes forward on either side, and two twin cabins, each with an en-suite shower room and walk-in wardrobe. A staircase leads up to the owner's deckhouse which has a saloon area as well as an office corner and opens out to a secluded cockpit aft that is divided into two sections. Shaded by tent-like awnings, the section closest to the deckhouse has inward-facing L-shaped banquette seating and tables which relate back to the deckhouse saloon, while aftmost is a more public owner's 'balcony', open to the stern, where the family can sit and enjoy views of their surroundings.

The main deckhouse contains both the bridge and a saloon with lounge and dining areas. Like the owner's deckhouse it opens out to a secluded aft cockpit, with banquette seating and an awning for shade. A central staircase leads down to two double guest cabins, which take the guest component up to 10. The crew and service area is forward of this, but separate with its own access to ensure guest privacy. Apart from the galley and crew mess, it comprises six cabins for up to 12, including personal staff, captain and crew.

Guests also have at their disposal a sun deck on top of the deckhouse, where an outside helming station is also located, and a seating area forward which is used to stow the tender when the boat is under way.

The 60m dhow has a deep 4 metre draught and an ample 9.7 metre beam, giving it voluminous interior proportions. The designers envisage a modern minimalistic interior that nevertheless has classical references to the dhow tradition in keeping with the contemporary interpretation of the dhow's exterior form and lines, and like traditional dhows it lends itself to being built in wood. Says designer Pieter Van Geest, 'We could not see it having a very traditional interior as this is already a modern styled dhow. We call it modern, however it still has all the characteristics of the classic past.'

An interesting aspect of the design is the sail plan, which has been developed together with Formula Marine. The designers wanted to retain the traditional shape of the sails but at the same time modernise them. Pieter Van Geest comments: 'We envisage this as easy to use, push-button controlled. It is obvious that tacking is not straight forward, although with current technology not impossible. To do this the mizzen sails have to drop first before the main boom can cross over. The intention is that the sails are furled in the booms and roll out when necessary.'

Although the original query did not lead to the dhow being built, Van Geest Design feels the design has potential, particularly for the Middle Eastern market with its cultural references and special layout. 'We do like the design and thought it a shame for it to be buried in a drawer somewhere. We do not expect a large market for it, however there must be a unique client out there for this unique boat.' Clearly a case of one man's dhow being another man's superyacht.