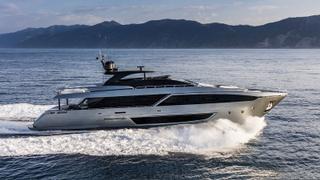 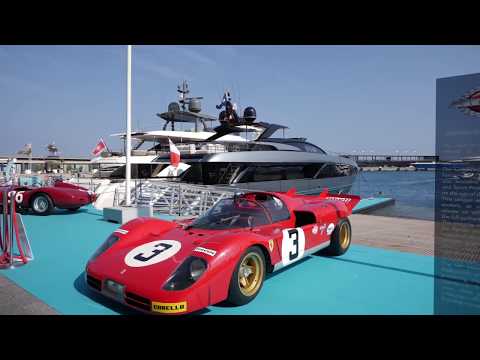 The first model in the new Riva 110 Dolcevita series has made her world premiere in Monaco, the Ferretti Group confirms. The new Riva flagship made her debut outside the Monaco Yacht Club, coinciding with the occasion of the Grand Prix Historique automobile race taking place in the principality. From May 11-13, yacht owners and car enthusiasts had a chance to see the new 34 metre Riva flagship.

“‘Dolcevita’ indicates a period and a style that could only be associated with a yacht of unrivalled beauty, one whose appeal will resonate in the yachting world for decades to come,” commented Alberto Galassi, Ferretti Group CEO. “We chose Monte Carlo for its debut, because this is one of the most ‘Dolcevita’ locations in the world, and the Grand Prix Historique, which is an event where legends meet.”

The Ferretti Group has also released a brand new video of the Riva 110, as seen below, which shows off her captivating details and high-speed performance.

The 34 metre yacht was launched in March of this year in La Spezia, Italy. This all-GRP flybridge yacht features styling by long-term partners Officina Italiana Design, including chrome inserts and extensive glazing that surrounds the main deck owner’s cabin and raised pilothouse.

The focus on al fresco living can be seen throughout the Riva 110 Dolcevita, from the foredeck seating area, complete with superyacht spa pool, to the aft sunlounging area on the upper deck.

The Riva 110 Dolcevita has been fitted with the Ferretti Group’s unique submersible transom, which allows for quick tender launches as well as direct access to the sea. This patent-pending system features a garage door that can fold down to create a bathing platform before lowering into the water when needed.

The yard adds that the tender garage on the Riva 110 Dolcevita is big enough to house a 5.7 metre Williams Dieseljet RIB and as well as a Jet Ski.

The main deck cockpit leads into the saloon, which has been described as a “luxury loft” due to the floor-to-ceiling windows and ability to open up to the elements on three sides.

Accommodation is for up to ten guests split between a main deck master suite and four VIP cabins below decks, while the crew quarters allow for a staff of up to five people.

What’s more, the zero-speed and fin stabilisation systems will ensure a smooth cruising experience, both underway and at anchor.

Other Riva projects currently in development include the 28.6 metre Riva 90 yacht, which is due to launch before the end of the year.