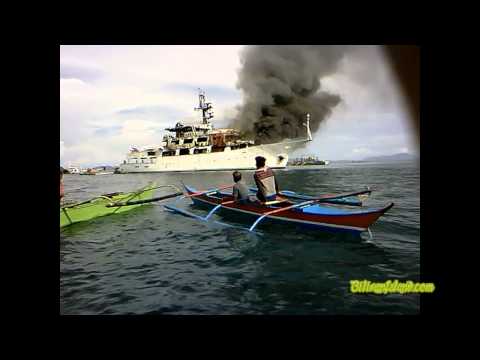 The 42.6m motor yacht Lubenico caught fire off the coast of Biliran Island in the Philippines. According to local reports, the nine crew members made it off the boat safely.

The superyacht was sailing from Tacloban to Manilla, reportedly carrying fuel when she caught fire, ABS-CBN news claims. It's thought the fire began at an exhaust pipe, but this has not been confirmed by authorities.

This video above shows motor yacht Lubenico burning at sea, with smoke coming from her bow:

Motor yacht Lubenico has a very interesting history. The vessel was built by the Kurushima shipyard in Japan in 1970, with a length of 40m. At the time of her build, she was called Hiroshima Maru (hull 646) and was a Japanese research vessel owned by the Hiroshima Nautical College. In 1997 she was converted into a yacht, named Lady Josefina, and has been under the Philippines flag since then. Between 2005 and 2012 she was called Northern Light and became Lubenico in 2012. She's had several refits in her past, including modifications to her bow, stern and superstructure and she's now believed to have a LOA of 42.6m.

As this second video shows, the smoke from the burning motor yacht could be seen from the shore, where crowds gathered to watch:

The crew sent a distress call at 12:40pm some 4-5km out to sea. The boat was still burning at 8pm, BiliranIsland.com reported, but a speedboat had been retrieved.