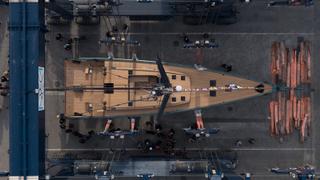 Vismara Marine has launched its Nacira 69 cruising sailing yacht in Viareggio, Italy. The 23 metre yacht was designed by Vismara in collaboration with naval architects Guillaume Verdier and Axel de Beaufort.

Built on a new generation hull inspired by the Imoca 60, the cruiser was built from carbon pre-preg and nomex under the supervision of Trimarine.

Key on deck features include a carbon mast and boom and four bow sails, with an overall sail area totalling 334 square metres.

The yacht is also equipped with a retractable tilting keel allowing for an in-port draught of 2.5 metres and sailing draught of 4.25 metres.

The interiors meanwhile are “spacious and comfortable”. The living area, comprising a dinette and large kitchen, sits at the stern and is accessible via a staircase leading down from the aft cockpit.

The sleeping area, meanwhile, sits forward with three cabins to starboard and a bathroom and cabin on the portside.

The yard revealed that the yacht, which has a beam measuring 5.8 metres, will be used for “extremely sport and fast cruising”, as well as racing.