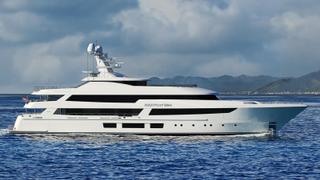 American yard Westport has opened up about its 65 metre flagship motor yacht project the W65, which would be be built from a steel displacement hull at parent company Chouest’s Mississippi facility.

Designed by Gregory C Marshall, the W65 is part of a wider refresh of the Westport offering sparked by client demand, which includes a new 45 metre design and a revamped W112 yacht. The impetus for this change is the success of the new W125, which began last year with hull number one Black Gold.

Speaking about the W65 at the recent Fort Lauderdale International Boat Show, director of sales Alex Rogers told Boat International: “We’ve worked with a repeat client who is probably going to take hull number one. It’s going to have great deck areas.”

Key features will include a foredeck water toy storage area, leaving the transom free for a fully-fledged superyacht beach club. Rogers explains that the superstructure could be built from either composites or aluminium depending on the client’s choice, although aluminium offers a faster delivery time.

Further details of the new W112 yacht were also disclosed at the show — the redesigned model is due to get Seakeeper stabilisers as well as Naiad fins for a smoother cruising experience.

Meanwhile, the W45 is still in the concept stage, although the engineering has already been completed in-house with a total interior volume of between 300 and 500GT. This all-new composite design will feature a beach club and a superyacht elevator giving access to all decks.