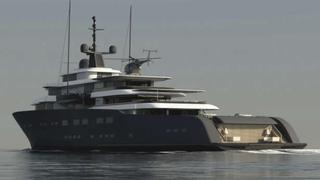 Monaco-based designer Stefano Pastrovich has added to his series of X boats with this 92 metre superyacht concept, the X-Ballet.

Pastrovich, who was behind Wally's power range, says the X-Ballet concept will stretch from 50 metre to 92 metres. It follows an X-Alien 48 metre concept superyacht last year and a series of other X-branded craft about which Pastrovich tends to release only bare details.

The design house has shared only two images of this superyacht but makes plain that the boat has something of a beach house atmosphere within its elegant lines. A vast aft deck is shown with long overhangs giving plenty of shaded area and privacy, as well as luxury fittings in a light upholstery with colour details.

The impressive exterior, complete with heli-pad up on the fourth deck, allows for the storage of a sizeable racing yacht on the port side deck.

Pastrovich has released a short video presenting the detail of this superyacht concept:

Pastrovich’s career started at the Martin Francis Design Studio where he was involved in the design of the 57 metre SenseS. Subsequently Kusch Yachts founder Claus Kusch commissioned him to design and develop the 104 metre Le Grand Bleu. In 2000, Pastrovich was appointed Chief Designer at the Wally style office where he worked on the entire Wallypower range. In 2005, Pastrovich decided to open his own design studio but he continues to work on the styling of Wally’s motoryachts.