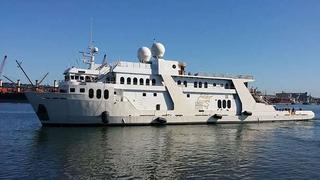 The steel yacht Danah Explorer underwent a four-month refit in South African Shipyards in Durban, South Africa. This is the third time that YachtProjects International has worked with this yacht owner on a major refit work of this yacht. YachtProjects International were also engaged by the yacht's previous owner during her original conversion as a Shadow Marine yacht and stayed on as the shore-based managers through the sale to the current owners.

Danah Eplorer has had many lives, starting out as Clipper Cap Haitien, before being converted to a Shadow Marine vessel. Above, she is pictured when she went by the name Peaceful Fish. In 2011, she had a major hull extension, to bring her from her former length of 51.8 metres to her current length of 67 metres. Now Danah Explorer has been reimagined with a new layout. The latest refit was undertaken in order to add an additional deck dedicated to the owner's use, which comprises the owner's stateroom, private lounge, gym and spa. Other refit work included creating a movie theatre and upgrading all the audio visual and IT systems. Moving the helipad up also allowed the creation of a new open sun deck, providing ample entertaining spaces, and an elevator has been installed to serve all decks.

YachtProjects International reports that all works were completed on schedule and on budget.