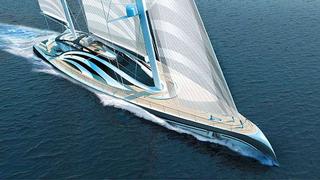 Boat International Media has announced the six finalists of the 2015 Young Designer of the Year Award, sponsored by Dutch shipyard Oceanco.

Open to those who would be only 25 years old or younger by the contest's 1 January 2015 deadline, the competition seeks out burgeoning design talent among student and trainee designers.

This year's entrants were presented with a concept drawing for a 55-metre sailing yacht and challenged to expand it into a fully thought-out design including the deckhouse (or deckhouses) and a complete general arrangement plan for the cockpits and all enclosed spaces.

Outstanding submissions by Lorenzo Berselli, Timur Bozca, Jacob Edens, Ben Hills, Antonella Scarfiello and a team project from Işık Gören and Harun Kemali were shortlisted as finalists from an impressive number of entries received from students and trainee designers from around the globe.

A panel of esteemed judges, comprised of designers and naval architects from some of the world’s leading yacht design studios, examined each entry in great detail. Submissions included sketches, exterior profiles, interior layouts and insight into the designers’ inspiration for their projects.

All six finalists will receive an all-expenses-paid visit to award sponsor Oceanco’s shipyard in The Netherlands. The coveted Neptune trophy, meanwhile, will be presented to the winner, along with a €5,000 cash prize, at the ShowBoats Design Awards prize giving, held during the Superyacht Design Symposium in Kitzbühel, Austria, on Monday 23 February, 2015.