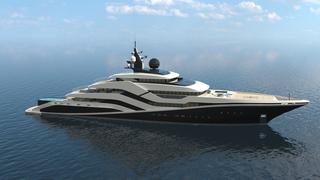 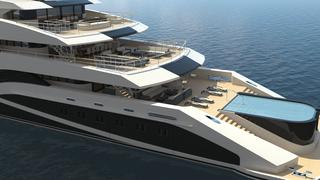 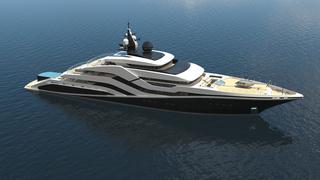 The new design team at NaoYacht Design and Engineering has released details of its first exciting yacht concept – the 76 metre Eivissa II. The appearance of Eivissa II is distinctive thanks to its “very beautiful shapes and its aggressive lines” said the design studio.

The main aft deck features a large swimming pool, which is seven metres long and five metres wide. The pool is overlooked by sun loungers and steps on either side provide access to the swim platform. Further forward on the main deck aft there is a protected bar and lounge area.

The upper deck aft and bridge deck aft offer different options for dining or relaxing in the sun or shade.

The raised foredeck has a convertible helipad, with sun loungers that can be rolled out when the helipad is free. A hot tub is surrounded by another comfortable lounge area, and provides a great spot to relax and enjoy the views from the bow.

The wide 14 metre beam gives the yacht plenty of interior volume. Eivissa II is designed to accommodate 14 guests and 21 crew. The large owner’s suite includes an en-suite bathroom, a large dressing room, a private lounge and an office. There are also six en-suite guest cabins, two of which have single beds for children.

Eivissa II has been designed with a draft of 4.25 metres, while the specially designed hull shape helps to deliver an estimated top speed of 18 knots.

NaoYacht was founded in 2015 by two young and passionate designers – Jesus Franco and Alejandro Gonzalez. The team creates superyacht designs with 3D and Computational Fluid Dynamic programs. These designs are tested and improved using wind tunnel and tank testing.

The Eivissa II concept adds itself to an impressive list of new concepts that are emerging. Many of these new designs are from up and coming young designers, including from the six finalists that were revealed for the Young Designer of the Year Award 2016. The list of inspiring superyacht concepts also continues to grow.