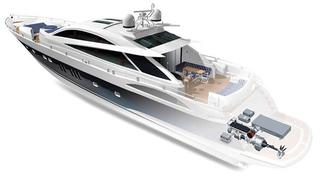 While hybrid power systems haven’t yet met with widespread acceptance in the yachting industry, a new system from Northern Lights coupled with battery improvements may mean the next generation of yachts will be able to incorporate truly useful hybrid power technology.

Losing electrical power on a large yacht, even when off charter, can be much more than a temporary inconvenience. A steady flow of clean electricity at the correct voltage and frequency is of critical importance to modern communications and control systems. And an unplanned loss of electrical power may create the first link in a chain of seemingly unrelated equipment problems that might not manifest themselves until days, weeks or even months after power is restored.

Electrical power is affected by all of the consumers on the distribution system. Starting and stopping heavy loads such as stabilizer pumps, air-conditioning compressors and some laundry equipment can cause large momentary changes in voltage and frequency to create what electrical engineers call ‘dirty power’. This is the source of many unexplained problems with a yacht’s electronic equipment.

Electrical power generation and distribution on large yachts seems to be as much art as science. Even if a yacht is delivered with generator capacity perfectly matched to demand, normal alterations and refits often increase and occasionally even decrease power requirements to the point where one generator is marginally capable of handling the load, but placing a second unit online means both are significantly underloaded. Overloading a single generator is unacceptable at any time, but engineers and owners are beginning to understand that underloading can be equally costly.

Recent improvements in storage battery technology related to the development of hybrid power systems for the automotive industry have created a shadow market for marine hybrid propulsion systems. But to date, very few hybrid marine power systems have met with widespread acceptance, partially due to high initial cost and limited performance.

The 2011 introduction of a marine version of the highly successful BAE Systems’ HybriDrive terrestrial drive system by Northern Lights, the Seattle-based manufacturer best known in the yacht market for its marine generator products, may provide a glimpse into the future of superyacht electrical power. How successful it will be for propulsion remains to be seen, but the technology it incorporates should have a far-reaching influence in future yacht designs.

Called the Northern Lights Hybrid Marine system, it utilizes a diesel engine to drive a generator that supplies electricity to a propulsion motor. If the power required to drive the yacht is less than that available, excess power is stored in a battery until needed.

That description is accurate as far as turning a propeller is concerned but ignores several features that might lead designers down a completely different path with regard to electrical power generation and distribution on large yachts.

The system is unique among its current competitors in that it does not transmit mechanical power from the engine to the propeller shaft. This means that the diesel engine and its attached generator can be mounted where and how they best fit.