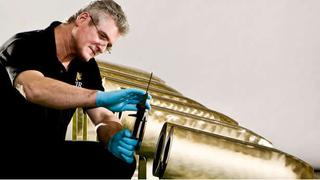 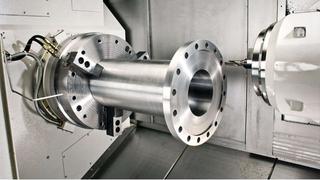 The CFD process always begins with the hull. Usually supplied by the boat’s manufacturer, the 3D computer-generated image enables a mesh of co-ordinates to be created, resulting in a virtual 3D environment around the entire hull. Once this is complete, the hull is positioned within it, initially with a fixed trim and heave. The other input is a set of ‘boundary’ conditions, which comprise fluid parameters such as flow rate, pressure and turbulence; these are then applied at each boundary of the virtual mesh.

In order to gain the required information relating to the area of interest – be that the propeller, the rudder or the hull itself – the flow conditions are calculated throughout the virtual environment, and this information can be used to gain insight into the performance of the hull, propeller or shaft. This is achieved by solving a set of equations governing water flow.

This repetitive process of obtaining the fluid properties throughout every part of the virtual environment is repeated in incremental time steps to allow unsteady flow to be accurately obtained. The time step sizes tend to be in the order of 0.1ms to 0.5ms, and this value decreases as the number of cells in the mesh increase.

Typically, mesh sizes are in the order of 20 million cells. To get a simulation time of two seconds, over 4,000 equations must be carried out, with each repeated action requiring its own internal repetitive loop to calculate the flow through every mesh cell.

For CJR, the project started in February last year but it quickly became apparent that a lot could be achieved.

‘It was May before we were receiving estimates of the drag and running trim at cruise speed, using 3D CFD predictions of a hull,’ says Russell. ‘The R&D team created a matrix of nine CFD simulations, with each representing the hull fixed in different heave and trim positions.

‘With that in place we could extract the real values we needed, with the drag broken down into hydrodynamic and aerodynamic components, enabling us to optimise the hull design, reducing drag from the superstructure above the water.

‘Last June, our first propeller was designed using CFD to predict the inflow to determine its performance. That was a significant milestone in the project’s development and a great moment where we realised the true possibilities.’

In July, the project took another major step and progressed to modifying, rather than just understanding, the propeller inflow. A study of the P-bracket followed, showing its design had a significant effect on propeller performance and could reduce its noise and vibration output, which is a considerable proportion of the total experienced on the yacht.

‘Altering the P-bracket design to change the wake into the propeller can have a considerable impact on the pressure pulses felt by the hull in the propeller region. We found we could reduce the pulses by up to 50 per cent and it had a knock-on effect of improving propeller efficiency, which can also contribute to performance.’

By September last year, CJR was receiving positive feedback from customers and when the CFD method was used for rudder analysis, by simulating several different designs, it prompted a major yacht manufacturer to immediately adopt a lower drag rudder.

Work on rudder design optimisation continued with CFD modelling of the swirling flow behind the propeller. This allows the rudder design to be optimised for the propeller race, with induced drag minimised by reducing rudder side force as the boat travels in a straight line. This in turn reduces the overall yacht drag, and can increase boat speed by an average of one knot across its RPM range.