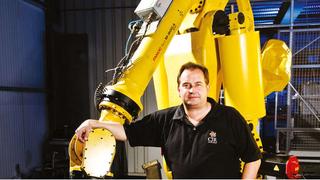 One of the first on-the-water trials CJR completed was for a high-performance 28.9m boat, comparing the existing, non-optimised rudder with one that had been through the full CFD process and which CJR believed would have a significant impact on the boat’s performance.

CJR recorded straight-line speed at different engine RPMs, and according to Russell, the results were encouraging. ‘Most interesting for us were where the biggest gains came from. Overall the boat’s top speed increased by 0.4 knots but we found that at midrange, between 1,600rpm and 1,800rpm, the improvement was far greater and we were recording increases above two knots. Also, her turning speed had increased significantly, by up to three knots.

‘These trials only analysed the rudder performance, so if we were addressing the whole package, there is a lot more we can do. Just looking at this trial, from the results we gained, we know we can still find ways to optimise further and deliver more uniform speed increases across the RPM range.’

At top speed, the maximum RPM reached by the engine increased from 2,373.75 for rudder B (the existing rudder) to 2,382.25 with the CFD optimised rudder A. This means the engine is operating above the optimum design RPM and as a result will be delivering less power to the propellers. Russell believes this would potentially account for the new rudder having less impact at the top speed compared with at lower speeds.

‘Knowing this means we can make further tweaks,’ he says. ‘For example, increasing the pitch of the propeller would reduce the maximum RPM of the engines and bring an estimated increase in top-speed of around one knot. Beyond that, the CFD optimisation could even be tailored to the yacht’s owner’s own preferred specification, with elements of the process, such as the toe in angle, set for the speed that the yacht will most often be operated at.’

So what this would mean for larger boats? ‘We’ve already done an extensive amount of work on several superyachts, up to around 40m,’ says Russell, ‘but always with efficiency, vibration and ride comfort as the central driving forces. Although there is usually a desire to be faster, it hasn’t been the primary motivator for our customers.

‘We’ve worked recently on a 37m Turkish-built superyacht and a British-built 40m and both have shown there is just as much scope for improvement on superyachts as there is for smaller boats: the process remains fairly constant.’

One example of a larger boat was a 40m superyacht, which underwent CFD analysis of its rudder, and again compared the manufacturer’s existing model with a fully CFD optimised, CJR designed rudder. CJR found that straight-on, the drag of the existing rudder was four times higher than drag of the new one. That translates to a one knot difference in boat speed at full power. The reduction in drag was also evident at a 35° angle, indicating that the boat fitted with the new rudder would retain greater speed while turning, compared with the existing rudder.