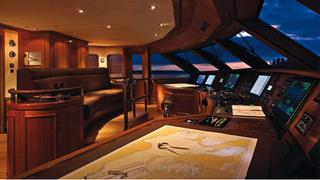 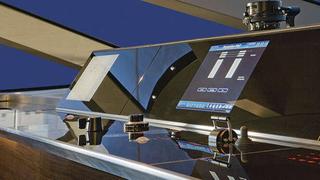 Step aboard almost any large yacht built 30 years ago and, in terms of design aesthetics and operational logistics, the wheelhouse and navigation bridges are likely to be disappointing.

Relative to those of today, boats were small and their wheelhouses – if there was one – offered precious little space. Worse, the consoles were a hodgepodge of equipment from various manufacturers, replete with competing designs, colours and operating controls. There were exceptions, of course, but in general the primitive electronics and limited size of the bridges constrained even the most talented designers.

In the early 1980s, interior design became more important, and designers began looking at ways to unify the mish-mash of radars, radios, autopilots and gauges into a coordinated installation that looked like it belonged on a yacht. Nevertheless, there were problems, namely that the best equipment – equipment built for commercial ships – was often too large, and too ugly, to be accommodated.

As yachts became larger, owners and their captains began spending more time working with naval architects and interior designers to integrate the equipment, which, thanks to solid-state technology and miniaturisation, was smaller and ran cooler than earlier generations.

Captains who came from commercial vessels brought with them a more defined sense of bridge layout and a knowledge of what equipment was available. Vendors, too, began to play a greater role, providing guidance in choosing equipment and delivering engineering to ensure compatibility and determine electrical load requirements.

The two greatest advances in bridge design – the ones that gave designers and crew the most flexibility – resulted from the introduction of black box technology and daylight-readable flat-panel monitors. Thanks to these technologies, gone were the days of monolithic, standalone units, mismatched equipment and interface problems. When engineered properly, black box electronics allowed a bridge console to be arranged in a way that worked ergonomically, while being flexible from an operational standpoint.

It is common on larger motor yachts to have a stand-alone navigation station that is equipped with a full-size chart table, with monitors that supplement repeaters for such units as the gyrocompass, the speed log, GPS and depth sounder. With black box technology, the captain or watch officer can view any of the equipment that can be displayed at the helm station on their monitor.

But even the best equipment can’t provide a safe and comfortable operating environment if it is installed in a poorly designed space.

The wheelhouse is a workspace, and there are three basic operations that must be addressed in any design: boat handling, navigation and communication.

Design issues should be addressed in the following order of importance: safe pilotage and navigation, aesthetics and guest interaction.

From operational and practical angles the helm station often blends all three, even if there are separate, discrete stations for navigation and communications.

It is particularly important that the helm station be arranged so boat-handling, navigation and communications controls are grouped within the helmsman’s easy reach.

‘The information that is necessary to operate the vessel safely is what should be primary in viewing and control,’ says AJ Anderson, an experienced captain and managing director of Wright Maritime Group. ‘Anything else will cause distraction and will reduce situational awareness in the short term and cause fatigue in the long term.’