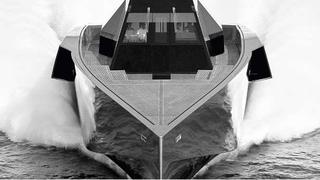 Gas turbines offer the most concentrated source of power in the marine world. With a turbine it is possible to pack 5,000hp into the same space that would be occupied by a 500hp diesel engine.

They are very light in weight for the power they produce; their maintenance requirements are much lower than a diesel engine because they just have one or two moving parts; they don’t need a vulnerable cooling water system; and they can produce full power immediately from start up.

Navies of the world love them, so why are gas turbines still seen as an exotic power source for motor yachts?

The main answer is cost. A turbine will cost perhaps four times as much as comparable diesel power. Their fuel consumption also is higher than a diesel and tends to remain high even at intermediate speeds.

As far as motor yachts are concerned, gas turbines are generally used as a way to boost power rather than as the main means of propulsion. In this role they will be found installed with a pair of diesel engines, with each engine coupled to a water jet. The wing diesels provide the normal cruising power, perhaps taking the speed up to 35 knots, then the turbine can be switched in on the centreline jet, perhaps adding another 10 or 15 knots to the top speed.

This is the engine package offered on the Pershing 115, where an owner can choose between having just a pair of MTU diesels producing around 5,500hp for speeds of around 35 knots, having three of these diesels, or replacing the centre diesel with a 5,000hp gas turbine that will provide a top speed close to 50 knots.

Danish Yachts offers a similar package on its very lightweight 38m Aerocruiser, where the addition of a 5,000hp turbine can take the speed to over 60 knots.

The favoured turbine for these applications is the TF50 from Vericor, which is a tried and tested unit that comes in two other versions: the TF40, and the new TF60. The same turbine unit can be configured to produce various power outputs. These units are the most popular in the yacht sector.

The high-performance 118 WallyPower used three TF50s for main propulsion – one of the few all-turbine installations on a motor yacht. The high speed of the basic turbine of around 20,000rpm had to be geared down considerably to match the requirements of the water jet units, typically to around 1,000rpm. There are specialised lightweight gearboxes to meet this requirement.

With all three turbines in operation, the 118 reached speeds close to 70 knots. For harbour manoeuvring, the turbines were a bit fierce, so a pair of 500hp Cummins diesels could be coupled into the wing water jets for more gentle progress.