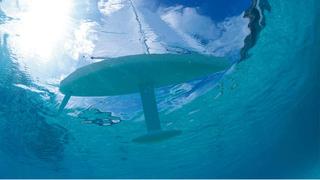 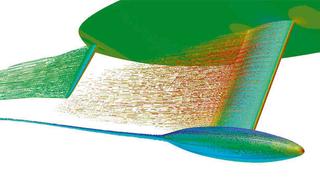 As luxury yachts grow in length and volume, so their draught also needs to increase. But the deeper the draught, the fewer harbours and marinas become available. Balancing the need for shallow draught with the design requirements for performance is tricky.

The lifting keel seems to offer a decent compromise, and is becoming increasingly popular. However the technical challenges are considerable, and then theres the added cost. One of the most impressive and extreme examples of lifting keel technology can be found on the recently launched _Hetairos _(known during her build as Panamax), the 60m ketch designed by Dykstra Naval Architects and Reichel/Pugh Yacht Design, and built by Baltic Yachts in Finland.

With the keel fully down, Hetairos draws nine metres, although there is also an intermediate keel position of six metres draught for navigating shallower waters. In the fully raised position, the keel will draw 3.5 metres.

Furthermore it is possible to raise the keel from nine metres to the six metre position while the boat is sailing and the keel is under load. This operation adds such immense loads and demands that the keel trunk is constructed incredibly strongly.

Naval architect at Dykstra, Erik Wassen is rightly proud of his involvement in designing Hetairos, but doesnt believe that the ability to raise the keel while sailing is necessarily something that other owners should aspire to.

It adds a lot of complications, incredible complexity to the bearings and the structure, he says. The cylinders need to be much stronger than if you dont have that requirement. But it will be interesting to see if we have similar requests in the future.

According to Wassen, the owner of Hetairos was particularly keen to have the ability to raise the keel while sailing, because he plans to go racing with smaller boats, around racing buoys in just seven or eight metres of water, less than the yachts maximum draught. As Wassen says, the complications go beyond the purely technical: When we start raising the keel during racing, we also wonder how the yachts handicap will be affected. It will be an interesting test case for the rule makers.

As yachts grow to the proportions of Hetairos, some interesting problems arise as Jim Pugh of Reichel/Pugh points out: As boats get bigger, with the increase in displacement, the loads become so much higher. The larger boat means heavier scantlings and higher loads making for a higher overall structural weight and lower ballast ratio. Compared with a smaller boat youre actually losing (ballast ratio) stability. This means you have to look at other ways of gaining stability  a canting keel, water ballast or a lifting keel.

For_ Hetairos_, the lifting keel is also supplemented by up to 24 tonnes per side of water ballast.