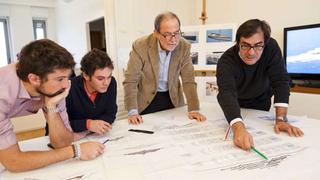 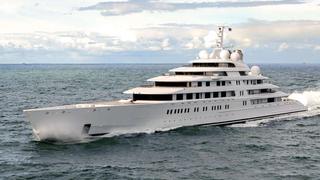 ‘We’ve had a lot of compliments for Azzam,’ says Mario Pedol coyly as we talk over coffee. ‘They all talk about elegance and balance, that she doesn’t look as big as she is, and I think this is a good achievement.’ Such modesty is the mark of the man. Pedol may be responsible for the lines of Azzam – at 180 metres, the largest private yacht yet built – but he is still actively engaged in the design of some of the smallest yachts around. So how did this Italian designer find himself at the forefront of large motor yacht design? It all starts – as these things always do – with a passion.

‘My grandfather sailed all his life on ships and liners as chief engineer,’ Pedol explains. ‘He’d sail three months on, then get a couple of months off, so he was around a lot in the summer when we were kids. We had a house on the Adriatic and a Riva runabout, and he’d tell stories of his life sailing around the world and from the war while teaching us how to navigate or read the weather. That’s how the “virus” first got in!’

Pedol’s love of the sea grew. By age 12 he had attended sailing school, and through his teenage and early adult years he’d go sailing and racing with friends, do deliveries, and spend time with friends who owned Half Tonners and One Tonners. He went to university to study economics and while there, quite by chance, had his first taste of the yachting industry. ‘A friend who owned the Half Tonner suggested we do the new 23-foot Mini Tonner class, that we should develop a project and try to build it. He had met a nice guy next to him in the marina on a chartered boat, and this guy said he would be interested in buying the first one.’

At that time, Italian designer Andrea Vallicelli had performed well in the Half Ton Cup in Trieste with his yacht Ziggurat, so Pedol and his friend took a train to Rome to meet Vallicelli and discuss the design of the Mini Tonner. ‘It was 1976, and we were in the middle of university so 21 years old,’ smiles Pedol, ‘and after two years of university you start getting a bit bored with study and you want to do practical things… We only gave the brief to Andrea because we didn’t have any design knowledge, so it was basically an entrepreneurial role, acting as a yard proposing the product to the market and taking care of advertising, sales and production.’

With Vallicelli’s design in their hands, they found ‘a crazy builder, who agreed to finance the mould. It started a bit like a joke’, says Pedol, ‘but it was very successful. We sold three off the plans, went to the Genoa boat show and sold seven in one week. Suddenly we had to produce 10 boats, to build an operation up! In two and a half years we had 40 boats sold and built.’ And the guy his friend had met in the marina, who had bought the first one, was none other than Pier Luigi Loro Piana. It would not be the last time that Pedol and Loro Piana would work together.