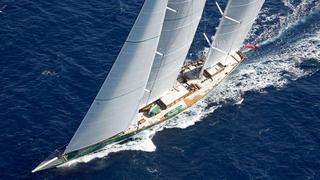 For motor yachts, there are numerous methods of propulsion which all have their place, depending on the requirements for a given project. Whether its conventional shafts and propellers for a reliable and cost-effective installation, pod drives for larger yachts offering increased manoeuvrability, or waterjets and surface piercers for speed, the choice for owners is considerable. For sailing yachts, though, the choice is rather more limited  and it is usually confined to conventional shafts or to saildrive legs, powered by conventional diesels through Z- or L-drive gearboxes.

Moreover, for performance yachts, there is an added complication  the need to keep the underwater area as clear as possible from appendages which might induce hydrodynamic drag and knock vital tenths off potential sailing speeds.

Alongside main propulsion, nearly all modern yachts rely on additional units to provide manoeuvrability in the form of bow and stern thrusters. Yachts fitted with powerful sternthrusters often cite those units as emergency propulsion options, claiming that get home speeds of 4-5 knots can be maintained if the main propulsion system fails.

For one cutting edge project, though, thrusters provided more than a means to manoeuvre. Enter Hetairos, the striking 66.7m, 2011-launched carbon ketch designed by Dykstra Naval Architects and built at Baltic Yachts.

With maximum speed under sail being one of the key design parameters, underwater appendages that might induce unwanted drag became a focus of attention. After several options were looked at, it was decided to opt for a retractable drive system, which would enable the yacht to retain a clean, flush underwater shape when the drives were not being used.

Power for the yacht, including the hydraulic thruster system, comes from four VW Marine diesels, and by the time thruster specialist Ocean Yacht Systems was brought in to the project, in January 2009, the dimensions for the thruster mechanisms had already been set.

The biggest challenges, says Ian Crowden, director of OYS Thrusters, were getting a fully operational, high-quality machine in a predefined area, and meeting the target weight set out in the project. We came up with a mechanical hydraulic drive to do the job, then we looked at changing out some of the primary components to titanium, including the main drive legs.

Such a mechanism had not been designed before, and involved around 18 months of research and development. Some of the major rotational parts are cast billet titanium, with the drive legs centrifugally cast. The main rotation bearings are composite.

We worked with the Marin Institute, which tank-tested a model of the drive legs to get performance data, and from there we fine-tuned the design. They were designed to be able to be deployed and retracted while the yacht was travelling at 15 knots, and a key requirement was a high bollard pull of 10 tonnes, which we exceeded. The four-blade props are 934mm in diameter, and are housed in carbon nozzles to maximise thrust.

The result is a highly custom drive system that enables the yacht to reach high speeds under power, while minimising drag under sail. It is unlikely that such thruster-based drive systems will ever become mainstream, and for the majority of projects out there more conventional means of propulsion will meet all the requirements of a given design. But for those few extreme sailing yacht projects, where the striving for ultimate performance means finding the ultimate custom solutions, Hetairos has shown that using retractable thrusters linked to a diesel-electric installation is now a viable alternative.