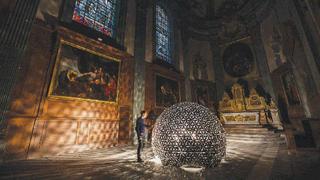 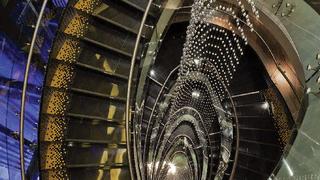 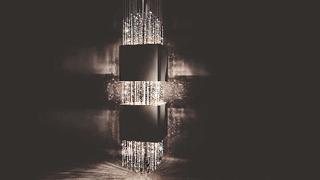 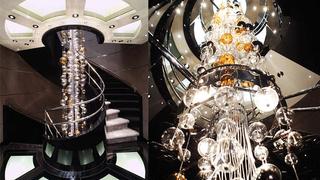 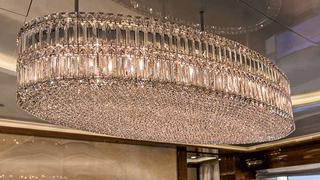 Superyacht lighting as an art form

Dutch artist Daan Roosegaarde is leading the charge in the interaction between light, sound and movement; and superyacht designers have taken notice.

Roosegaarde’s Lotus Dome installation within the quiet walls of the 17th century Sainte Marie Madeleine church in Lille, northern France, contained ultra-light aluminium flowers that opened and lit up in response to the movement around it. The light slowly followed the visitors, creating an interactive play of light and shadow.

Another installation called Dune, a 61m interactive landscape of light and sound along the Maas river in Rotterdam, was hailed as a “hybrid of nature and technology” that brightens in response to the sounds and motions of passers-by. Roosegaarde calls these installations “techno-poetry” – the dynamic relation between people and technology – and it’s this concept that superyacht designers are paying attention to.

“Lighting plays such a critical role in how we understand a space,” says designer and naval architect Adam Voorhees, “and how we can control and direct an experience in that space.”

In matters concerning superyacht interior design, one thing is certain: lighting is no longer a finishing touch, but rather a critical element of the yacht design process. Gone are functional but dull light sources defined by the location of electrical outlets or limited by space. A symmetrical overhead grid based solely on power consumption and heat output is passé. In recent years, advances in superyacht lighting design have converged with the precision and automation evolution in the design and build process, to produce so many new lighting possibilities.

Today, lighting is largely responsible for rounding out the soul of the superyacht, enhancing and completing the energy visualised by the owner and/or designer. From mood lighting to colour-changing light-emitting diodes (LEDs), even the most standard specification allows for a yacht’s ambience to be easily modified via an integrated system that transforms from day to night, calm to energetic.

“I don’t think there is another method or process in design for transforming a space that is as instantly effective as changing the quality of the light,” says Voorhees. “Superyacht lighting – natural and artificial – can control, influence, react – and inform the shape of a surface, the size and position of openings, the material choices for floors and ceilings, and even how I want to control the circulation patterns on board.”

Aboard the concept for a 61 metre high-performance sloop, Voorhees has specified ambient superyacht lighting that changes in response to external environmental conditions or direct user input. The yacht Aandeel is based on a proven Sparkman & Stephens racing yacht platform now refitted to a smart racer/cruiser and features comprehensive indirect lighting throughout. Customised software enables the intensity and hue of the superyacht lighting in each space to be controlled via an iPad. “The thought behind this is to allow users to adapt the lighting based on their mood, an event or even the time of day,” says Voorhees.

Beyond ambience, superyacht lighting has now taken on a thrilling responsibility: it has become the artistic focal point – art that provides a light source, a light source that is art itself.

“[Years ago, designers] would install a chandelier aboard a superyacht and that was it, there was no other light source. The rest of the room was lost,” says design director Sally Storey, of UK-based Lighting Design International.

For nearly three decades, Storey has designed and installed lighting schemes on board yachts and in residences, hotels and commercial spaces around the world. Storey was influential in early yacht projects that showcased pioneering lighting design such as the 57 metre sailing yacht Twizzle and the 55.5 metre motor yacht of the same name, as well as the 75 metre Lürssen Northern Star. Today, through her company, her superyacht lighting creations grace builds of 90 metres and beyond.

“An oversized chandelier is an art piece,” she says. “What is important is that it be treated like a light sculpture and not as a total light source, otherwise you’ll not get the integrity of the object.” Storey advises planning for ambient light around the installation, so that the installation itself remains a focal point, otherwise the space will be overlit.

A magnificent superyacht lighting feature can be created out of nearly anything with reflective or translucent quality, she says. “That’s the wonderful thing about decorative pieces these days. From crystal and glass, to mirrors, chainmail and aluminium and the more rustic materials, like fine bone, the options are hardly limited.”

Can you use chandeliers on superyachts?

Why not? Step aboard any prominent superyacht build of the past three years and you will probably be greeted by a soaring, gravity defying and breathtaking sculptural lighting installation. While once it was thought chandeliers would not withstand the test of being at sea – all that vibration and salty air – but designers including Andrew Winch, Evan K Marshall, Reymond Langton, Guido de Groot and H2 Yacht Design have created stunning designs, some installations as long as nine metres.

The key is that the piece must not vibrate, says design director Sally Storey of Lighting Design International. “A wall is easy but with a chandelier, it should hang on rods or tension wires. Small filler pieces are incorporated between crystals to stop them hitting one another.

“The lighting can be integral or lit from a distance – from the top of a staircase, for example, so the light source shines down through the crystals.”

One of the longest chandeliers installed on a superyacht appears on the 70m Proteksan motor yacht Talisman C. This 8.5m installation (left) rises through the main staircase well and comprises hundreds of glass bubbles of crystal, amber and silver lit by both fibre optics and conventional lighting.

Traditionally, crystals were purely used for refracting and reflecting light, but Swarovski, a world leader in cut crystal technology, is now using crystals to control, conduct and colour light. “We see the opportunity to create a very clean light,” says Daniel Cohen, a Swarovski director.

Where ceiling height might preclude a feature-type chandelier, the company has manufactured tiny bulbs so they throw patterns on the overhead itself (right). As far as design and style go, says designer and naval architect Adam Voorhees, it depends on what the aesthetic designer and client want to achieve. “Designers at Swarovski create designs for all lights but also invite outside designers for a creative session to expand its world view. For Swarovski’s product line, designers are tasked with re-imagining how and where light can be used and how to use light in a totally new way.”