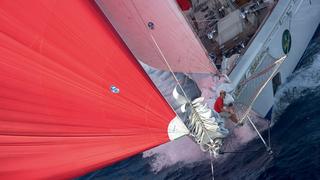 The advances and future of sailcloth

Superyachts are sailing harder and faster than ever before. Ten years ago, when big boats went racing, they weren’t so much racing as sailing around a racecourse in an orderly fashion.

Today superyachts are being raced hard, and part of the reason for that is the advance in rig technology. Masts are made out of carbon, not aluminium; nitronic rod rigging is being replaced by composite rigging; and sail construction has advanced in leaps and bounds.

As superyachts have increased in size, so the loads on the sails have increased exponentially. Sailmakers have brought all their experience and technology from the racing scene – the America’s Cup and the Volvo – and applied it to the design and construction of superyacht sails.

The scale of some of these projects is breathtaking. For example, one of the reacher sails built for S/Y Twizzle has a foot length of 32m. That’s longer than some superyachts. These are exciting times for superyachts, but with any progress comes risk. With high loads, crew safety is a real concern, and in this article we consider the merits of some different kinds of rig configuration.

Maltese Falcon lit a new path with her revolutionary clipper rig, which proved safer and easier to handle than most conventional sail plans. Meanwhile, in the America’s Cup, BMW Oracle’s wing rig has inspired Wally yachts’ Luca Bassani to develop his own wing rig, which he claims could make superyacht sailing safer and faster.

Advances in sail technology have filtered through to superyachts, with string sails replacing more traditional panel sales, although some sailmakers question whether this has been a step backwards. In the America’s Cup, race teams are prepared to throw sails away after just a few hours of competition. Lightweight sails may be fast, but they don’t last. Surely superyacht owners should expect greater longevity from their sails, but perhaps that will require a change in regulations, maybe a specification of minimum cloth weight, for example.

Then again, you can’t stop progress, and nor would you want to. Sail technology is advancing as rapidly as ever, and perhaps the next generation of string sails will address some of the problems of longevity. For example, North Sails believes that its new 3Di technology will soon replace 3DL as the standard among performance racers.

Developed for Alinghi in the lead up to the 2007 America’s Cup, 3Di offers a big step up in terms of performance. It’s less stretch for a given amount of weight. Will the superyacht world choose the extra strength, or the lighter weight?