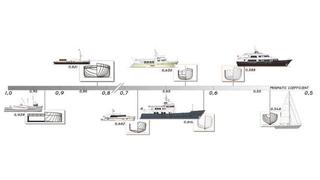 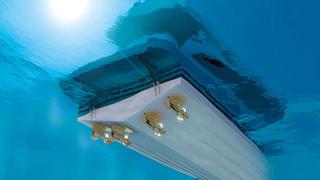 Two years ago, says Peter Bouma, a naval architect at Vripack in Holland, we had a Brazilian owner who wanted a displacement trawler. During our initial talks about the design, he put to us a requested design speed that was 2.5 knots above the designs hull speed. For us naval architects, this is a terrible speed to design to. Not only is it complex to get a good estimation for, its also not an efficient speed from a fuel economy point of view. His reasoning was logical  he wanted to sail in quite heavy seas, but his typical weekend trip was going to an island and back in a day. He wanted that particular speed to be able to have dinner at a certain time and still get back before nightfall. The answer was to install a big, expensive engine and to burn a lot more fuel on that specific trip  a compromise that, once explained, he decided he was prepared to make.

I am sitting in Vripacks offices in the Dutch town of Sneek to talk about the basic elements of naval architecture that every owner should know. With me are Bart Bouwhuis, director of design; Ierring Faber, manager of the naval architecture side; and Aleksandr Markov and Peter Bouma, both Vripack naval architects. Boumas example of the Brazilian owners request highlights the importance of understanding what you require from your new yacht, and therefore what compromises you might have to make. Its a key aspect of the concept design phase, and a key element to ensure your dreams can, in fact, become reality. And for all the styling up top, naval architecture is still king. For sure, you can create a body under any object, says Bouwhuis, and it will float and have the right stability, but how will it behave in a seaway? Well, thats a different matter, so it all really depends on the operational profile.

Design revolves around a golden triangle that must always be in balance  speed, weight and power. Whenever you alter one of these factors, the others must also change to keep the triangle balanced. So, for example, if you add weight, you also have to add power, or lose speed; if you want more speed, you have to add power or reduce weight; and if you reduce power, you either have to reduce weight, or lose speed.

Theres no magical solution to break this triangle, explains Bouma, and when a client comes with an idea that apparently does break the triangle, theres always an explanation  perhaps a different material has been specified so the overall weight is less, for example.

If you look at the three general hull forms available for yacht design, they all demonstrate the different solutions of this balancing act. A displacement hull has a limited top speed (more on that shortly), and within the speed range if you want a high volume, heavy displacement boat, you need to add more power. Similarly, if you want smaller engines for the same size yacht, you either accept that you will go slower, or will have to compromise on volume and weight  lessening the displacement, in effect. Displacement, of course, is simply the weight of the water that is displaced by the yacht  the hole in the water, if you will. We have Archimedes to thank for that discovery.

A semi-planing or planing hull requires a different balance of the triangle. In these cases, your power requirement goes up with the speed for a given weight, or you have to reduce weight in order to get the higher speeds. Naturally, it is never quite as simple as this, and there are some key factors that determine what can and cant be done with a hull design. It is these factors that show why you cant have a large, high-volume and heavy displacement steel yacht that planes at 60 knots, for example. If youve ever talked to naval architects about the design of your new project, it is likely you will have heard them bandy around arcane terms such as prismatic coefficients and Froude numbers. But what do these mean? Having a basic grasp of these concepts means that you will not only have some idea of what the naval architect is talking about, but will also help at the concept stage in realising why your 60-knot planing steel giant is just not possible.