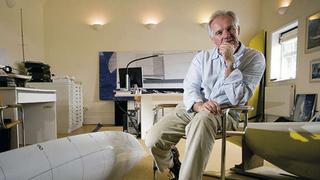 Ed Dubois is the man Boat International readers have praised for being ‘endlessly inventive’, ‘the most successful designer of large sailing yachts’ and ‘setting the standard in sailing superyacht design’. But when Ed Dubois started designing in the early 1970s, all he wanted to do was design yachts that would win the Admiral’s Cup and other major regattas.

‘I started on my first boat when I was 23,’ he says from his office in the quiet English village of Lymington. ‘The goals were boats that would win the Admiral’s Cup and the Ton Cups. I wanted to tread in the footsteps of German Frers, Ron Holland and Bruce Farr.’

Incredibly, he achieved one of his goals with his first design, Borsalino Trois, which won the 1976 Three-Quarter Ton Cup.

That early success gave him enough propulsion to catch the wave of racing yacht design, which he surfed until the demand for custom-designed, high-performance racing yachts started to dry up. But not before Dubois designs had won the Admiral’s Cup, the Sydney to Hobart, the Fastnet, and other world championships.

In the mid-80s Dubois spotted another wave and caught it before he, or arguably any other designer, realised just how big and powerful this wave would become.

‘In 1987 we launched Aquel II, a 37m yacht which was the first to have the hidden captive winches and ventilation systems,’ he says. ‘I was fortunate to have an owner who wanted the space planning to be a little different. As a result, I realised early on that people were interested in the look of the boat – it had to be seaworthy, but whether it went 14 or 15.5 knots didn’t matter. It had to knock your socks off when you looked at it, the flow through the living areas had to work, and people wanted to be able to see out from the living areas to the horizon – they didn’t want to feel as if they were going into a dark, enclosed space where you got seasick.’

When Aquel II caught the eye of Australia’s Neville Crichton, Dubois’s long association with the New Zealand yachting industry started. Crichton commissioned his first of eight Dubois yachts to be built by Alloy Yachts and spawned a relationship between the naval architects and builder that laid the foundations of both companies’ success today.

‘It was Neville Crichton’s vision and money, Tony Hambrook and Alloy Yachts’ engineering ability and our design flair that was a huge shot in the arm for the superyacht industry. Kiwis came up with better captive winches, furling booms, carbon fibre masts that worked,’ Dubois says.

‘They are very good at fixing stuff with no money and that suits the make-and-mend mentality that’s required on yachts. Thanks to their ingenuity and stubbornness, I owe a huge debt to the industry down there because they allowed the superyacht industry to develop.’