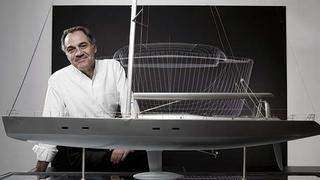 Luca Brenta was always intent on becoming a yacht designer. As a child he accompanied his father to oversee the construction of the family boat, and recalls: ‘It was a special rapport between father and son and I became fascinated with it all: the construction, the smell of the wood, the people who worked on the boats…’

His father, passionate about boats, kept a drafting table at home so that he could sketch his ideas. Luca would return from school and promptly erase them in favour of his own designs. The passion passed from father to son.

But while the initiation from his father may have planted the seed, it was building the first boat, Babaloo, that nurtured the growth. It was constructed of C-flex – a ‘first’ in Italy – and Brenta gained hands-on experience working alongside the masters in the shipyard.

Like Luca Bassani, with whom he has worked on Wally projects and who shares his aesthetic sense, Brenta has a joy for his profession. Devertire – fun – is a word that crops up often in conversation. Babaloo was named after the girl in a Mel Brooks film who pops out of a birthday cake singing ‘babaloo’ – clearly Brenta has a keen sense of humour.

Brenta immerses himself in technical research, reducing every aspect to the simplest detail. ‘I am known for my handling of the essentials, the fundamentals and the simplicity of the boats we design,’ he says. ‘Few details but very well made – that has been our guide. I have tried to reduce it to its simplest form: a hull, a deck and a coachroof. All the rest is too much and not needed.’

Well maybe it’s not always that simple. Take, for example,_ Ghost_, created for a client who wanted speed and comfort for Atlantic crossings. One of the prominent features was a deckhouse of glass, which, surprisingly, the client initially balked at despite living in a house that Brenta describes as an enormous box of glass. ‘It was designed to create vertical illumination and tie in the outside with the inside.’

Brenta complains that often the external architecture of a boat has no connection with the interior’s, created by an interior decorator. ‘This really annoys me,’ he says. ‘We have worked with interior designers and architects of houses and it was very interesting because they have an approach for the interior typical of a house, while we have a nautical approach. These disputes over design were the most fun. I don’t think it was an imposition for them because it was always work with four hands, a group effort, but the result was it had to be a new interior for a boat, not a house.’