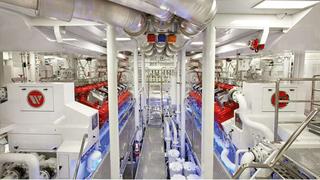 The case for more space

Yacht owners of today demand more from their vessels than their predecessors did three decades ago, and one of their main demands is for more space. Specialist areas such as beach clubs, gymnasiums, dive rooms, health spas, cinemas  practically unheard of in the past  are now regularly demanded by owners of even the smallest superyacht. The problem is fitting them in.

A prospective owners choice of conventional diesel propulsion or a variant, such as diesel-electric, can have a direct bearing on the space available for the amenities he requires.

One might think that the solution to accommodating more amenities is simple: just build a yacht with slightly more volume by adding a deck or increasing the beam. But things are not that straightforward.

In the same time frame, international maritime laws have clamped their icy jaws around the internal volume of a yacht, and have selected its gross tonnage (GT) as the yardstick for the marker points when regulations governing crewing and safety requirements are imposed.

All yachts above 23m LOA are subject to such regulations, whose impact increases at regular intervals: 500GT, 1,200GT, and 3,000GT. Most prospective owners aim to stay just inside their chosen size limit.

Naval architects, designers and builders are under pressure to reduce volume lost in voids or allocated to areas that dont excite an owner

The catch is that gross tonnage is not a measure of weight, but of enclosed volume, so an owner inclined to add a dive room or some other volume-hungry facility has to be wary of breaching the next upward limit, which will certainly take him into areas of greater cost and regulatory complexity. So a yachts internal volume has become more valuable in recent years. As a result, naval architects, designers and builders are under pressure to reduce volume lost in voids or allocated to areas that dont excite an owner.

Crew areas used to be under pressure in this way, but over the years the realisation that a happy crew usually means a well-run yacht with good service  a distinct owner benefit  has removed the pressure from crew spaces, as have the upcoming maritime labour regulations which, among many other features, will specify the minimum size of crew cabins.

Inevitably, the next target for slimming down becomes the machinery spaces, which, although vital to the running of the yacht, can often yield a degree of their volume without adversely affecting reliability. In pursuit of allocating even more space to guest areas, some builders of large yachts have removed engine control rooms while, in smaller yachts, the tender garage often intrudes on the high level space above the engines. But perhaps even more volume can be turned over to the owners use by choosing an entirely different propulsion system.