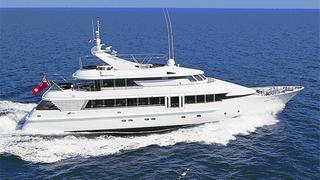 50% off two-week charters on AquaLibrium at Ocean Independence

A quick snippet from Julia Simpson at Ocean Independence as she tells me that James Graham-Cloete is offering a 50% discount on his central charter listing, the 40m motor yacht AquaLibrium after August 21st for any two-week period.

Built by CRN to Lloyds class and MCA compliant, this superyacht has a Walter Franchini interior offering excellent headroom and accommodation for up to 11 guests in a full beam master suite plus a double and two twin cabins. Twin 2600hp Deutz engines give AquaLibrium a range of 2,000 nautical miles at 12 knots. She's currently booked until August 20th and the owner wants to fill in the end of season dates. Available in the Western Mediterranean, her normal weekly rates are €112,000 in August and €91,000 in September.

AquaLibrium is listed for sale on boatinternational.com by Ocean Independence asking $7.45 million.